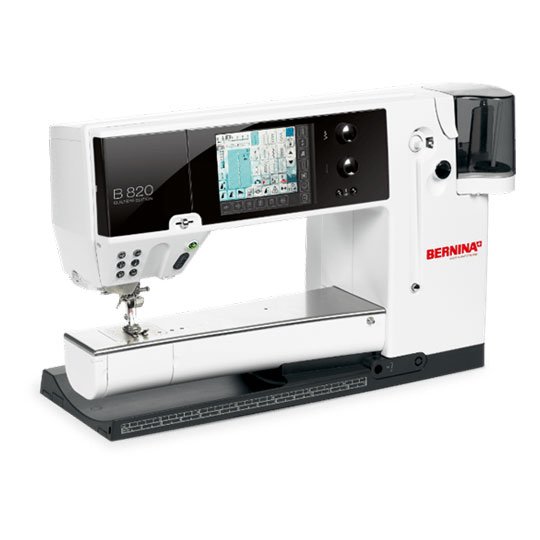 Raising sewing and quilting to a new dimension

One of the many advantages of the BERNINA 820 QE is its extra-large work area: more freedom of movement, a clearer view of your work, and absolute control over your sewing project make the BERNINA 820 QE the top model in its class.The BERNINA 820 QE’s 40-cm-long free arm lets you handle even large-format sewing and quilting projects with ease without sacrificing your clear view – an advantage that you’ll never again want to be without. And with a generous 30 cm space to the right of the needle, you won’t be short of room to rotate or move your fabric, even when free-motion sewing or quilting. It doesn’t get any better than this!

Thanks to BSR functionality, precise free-motion quilting with the BERNINA 820 QE is easier than ever before. The innovative BERNINA Stitch Regulator (BSR) corrects irregularities when guiding the fabric, so that each stitch is exactly as long as the previous one – with straight or zigzag stitch, and at any sewing speed. This globally unique, patented feature guarantees an even stitch pattern in any direction of movement, thereby also easing the novice’s progress in free-motion sewing. You decide on the direction of sewing – the BERNINA Stitch Regulator ensures an incomparably precise stitch pattern and provides immense creative possibilities, even for inexperienced free-motion quilters.


Precision with 1,100 stitches a minute


Jumbo bobbin for a generous supply of thread

The BERNINA 820 QE’s jumbo bobbin is also testament to this machine’s excellent handling and premium features with 40 percent more thread capacity than a conventional bobbin, the jumbo bobbin continues to dispense thread long after the standard model has run out. With bobbin changes required less frequently, users can devote more time to their creative projects while avoiding undesired interruptions. The lower-thread indicator of the BERNINA 820 QE gives you sufficient advance warning that the bobbin will soon require winding. The actual changing of this part is accomplished with minimum handling, with the bobbin case swinging out and forward when the compartment is opened, letting you remove the handy jumbo bobbin by simply tapping the catch, and then replacing it – proof positive of the BERNINA 820 QE’s excellent handling in every respect.